Brand loyalty – a thing of the past for technology brands?

This year’s Consumer Electronics Show will feature everything from biometric socks and other ‘wearables’ to 3D printers, drones, robotics, virtual reality and TV’s where the clarity is best described as ‘breath-taking’. However, in the recent Brandwatch Report on consumer technology it was reported that 78% of consumers are not loyal to any one particular brand. I have not seen the original research, but I have seen the writing on the wall for technology brands where both genders value features at a decent price above all other factors.

Where has loyalty gone?

Of all the factors taken into consideration when purchasing a tech product, brand loyalty is not a major determinant as can be seen in the table below: 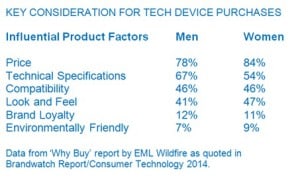 So what has changed?

The question is what has changed. The answer is simple: the amount of information readily available at the swipe of a smartphone screen. Before the advent of social media and product review sites, we were relatively in the dark, or at best we could ask a relative like an uncle, but you had to essentially trust the information that the brand was giving you. That’s where you got educated.

However, today school’s out and we no longer need the brands to teach us where value lies. When Apple launched the iPad, it virtually owned the tablet market. Today, the category of ‘other brands’ holds the major market share. The market has become much more fragmented, because people can find out about a new brand from sources other than the brand itself. Sources they trust.

The dissatisfaction with 3D

A few years ago we were told that 3D TV was the next big thing. However the social stratosphere were less than enamoured with complaints of having to wear the bulky glasses to watch something which had the occasional nasty side effect of nausea. Not something to get people to talk about positively. Take this comment from CNet’s TV Buying Guide (http://www.cnet.com/topics/tvs/buying-guide/)

The main thing you need to know is that every 3D TV is also perfectly capable of playing 2D content, too, so we prefer to think of 3D as an extra feature as opposed to a separate type of television. It’s also largely unnecessary. Lack of content is king; most people with 3D TVs never use the 3D feature.

When Voucher Codes Pro in the UK asked owners how they felt about their purchase of their 3D TV’s, nearly 80% ‘regretted buying a 3D TV’ and Over 60% cited ‘lack of 3D films and channels’. One can understand the gusto of manufacturers to bring this to market, but without content it was pretty much an exercise in dissatisfaction. The problem occurs when you have to look at this thing in your lounge every day, building up resentment to the badge on the front. Chances are your next TV won’t be the same brand. However, who knows what you might buy once you’ve been educated by the market.

It’s amazing how history repeats itself. Philips Electronics brought out the magnificent HDTV in 1980; unfortunately they were 20 years too early. The hi-definition cameras and transmission standard – which were needed to make HD deliver – failed to arrive in time. It cost the company US$2.5bn in the form of write-offs.

4K TV’s may suffer the same fate. If you Google ‘review 4k TV’, right up top in the organic search is CNET’s review titled ‘Why ultra HD 4k TVs are still stupid’. Basically the argument is that there are more important aspects to picture quality than just resolution. They use a great example to show the limits of picture clarity:

Go to the beach (or a big sandbox, or a baseball diamond). Sit down. Start counting how many grains of sand you can see next to you. Now do the same with the grains of sand by your feet. Try again with the sand far beyond your feet (like, say, 10 feet away). The fact that you can see individual grains near you, but not farther away is exactly what we’re talking about here.

Granted, if you sat right up against the TV you’d see a clearer picture, but if you’re sitting at a normal distance, there’s nothing much in it. However we often don’t buy things for what they do, but for what they can do, so there will be some impetus for sales.

Here’s where social listening comes in. Brandwatch analysed online activity and the problems become clear especially with the segment who want to watch movies. The file size is large and the UltraHD films are few and far between.  Also, with those who wanted to use it as a monitor, the fact that the smallest screens are 55 inches was also seen as a negative.

But even as I write this article, 8K is being released at the Consumer Electronics Show where the clarity is approaching the unbelievable. So the future of 4K is not certain, but consumer sentiment is a clear guideline to what one can expect. And for technology brands that means their most valuable source of intel is the information they don’t provide.

The consumer no longer depends on the advertising, the salesperson or the impossible-to-understand instruction manual. However, the information the consumer either contributes or consumes is openly available, so eavesdropping on the consumer has never been more crucial or available.

It’s all encompassed in that one word of advice I am given once in a while: “Listen”.

Reference: This article is largely based on the Brandwatch Report / Consumer Technology 2014. http://www.brandwatch.com